Researched by the students of 4L Transition Year 2008-2009, assisted by their teacher Mr Ray Byrne

The Historical Setting of Dún Lughaidh

St. Louis Secondary School Dundalk is of comparatively recent origin but Castletown, the area in which it is located, has a long history of human settlement.  In these pages we will outline some of the interesting events that have taken place in the immediate area of Dún Lughaidh over the centuries. 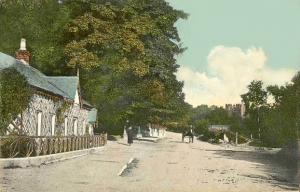 Overlooking the very flat site of Dundalk is a formidable ridge and earthworks to the west of  the town in Castletown.   Throughout its long history it has been known by a variety of names, the most common and modern one being ‘Cuchulainn’s Castle’.  Because of it’s strategic importance controlling the important ford a Toberona it has played a significant role in the history of settlement in the area.  It was first mentioned in the stories of the Ulster Cycle as Delga or Delca, ‘dealg’ being the Irish for ‘thorn’.  It may have been given this name because of its impressive height. While the events of the Cycle weren’t written down until the 7th century,  they could date back to the time of Christ.  The site is also mentioned in the Tain as Delca Muirtheimne as the home of Cuchulainn.  The use of the word ‘Dun’ dates from the Annals of Ulster, 1002 A.D. which would indicate that it had become by then an important Celtic defensive site.  The souterrain, or underground passage was typical of  these hill-forts.  Some believe that Dun Dealga was a reference to a Firbolg chieftain called Dealga.  It was also an important meeting point for feasting and the formation of alliances as when Brian Boru met with the King of Ulster. When the Normans came in the 1180s the Dun entered a new phase in its history.  It was selected by Bertram de Verdon as a suitable site for a motte-and-bailey type castle.  These were hastily erected to secure newly conquered territory.  The height of the Dun would have been increased and a wooden palisade and tower erected on top.  A deep fosse was dug around this motte for extra protection and two baileys or enclosures provided for the safety of ordinary people and animals. It was referred to as ’the castle of Dundalc’ in the marriage settlement of Bertram’s daughter Leselina.  Significantly this was the most northerly motte built by the Normans but its strategic importance was diminished when the seat of power transferred to the formidable stone castle at Roche and later to the town of Dundalk.

In 1780, the Dun took on a new lease of life when Patrick Byrne of Saltown erected his primitive Gothic style house on its summit It included  a three storey hexagonal gazebo with adjoining entrance and stair tower.  The house  was accessed by means of a spiral driveway.  This house was partially destroyed during the 1798 Rebellion and reduced to a ‘Folly’.  In 1850 it was  rebuilt by T. Vesey Dawson as a country retreat and a set of two storey rooms and a yard added.  By 1910 it was described as ‘unfortunately going from bad to worse…and seemed in danger of being completely disfigured or destroyed’. 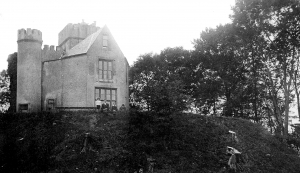 The Dun and house were purchased by the County Louth Archaeological and Historical Society for use, appropriately, as a museum. This worthwhile venture came to sad conclusion when it was partially destroyed by fire during the War of Independence in 1921 when it was garrisoned by the Black and Tans.  As a result of further damage during the Civil War in 1923 the building was finally abandoned.

The large bailey to the S of the motte was levelled at the turn of the 20th century and a water treatment plant built there in 1960.

In the 1980s what was left of the ruins of the house were levelled leaving the walls less than a metre high; only the tower remains standing. 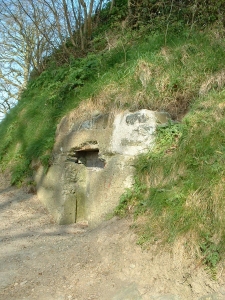 The Castletown area has a great concentration of souterrains.  There are no less than 10 of these underground passages or man-made caves within a mile radius of the Castle.  They were probably built between 1000 and 1500 years ago and are usually associated with ring forts. Their primary use was as places of refuge in times of danger and normally included a variety of elaborate defensive devices.  They may also have been used for storage of foodstuffs and valuables and people may have slept in them in bad weather.  Today they are usually blocked off or filled in for public safety.

The entrance to the souterrain on Dun Dealgan can be seen along the spiral ascent.  It is L-shaped in plan, consisting of a corbelled dry-stoned passage 6.8 m in length at the end of which there is a drop-hole giving access to a gallery 6.7m in length. Local folklore in error attributed this passage to Pirate Byrne in the belief that it extended the whole way from the Mount to his house at Saltown and used for his smuggling activities.    Two other souterrains were discovered relatively recently during the construction of houses at Farndreg.  One of the finest Irish examples open to the public, however, is to be found at Donaghmore where the 3 passages total 38.5m in length.

The large granite boulder in the Mount Field has been the subject of much speculation over the years. 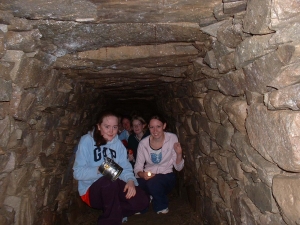 It dates from the Bronze Age and is said to be the only prehistoric monument visible in Dundalk today. It has been known by a variety of names.  The Book of Leinster refers to it as Lia Lingadan or  ‘the stone of Lingadan’.  Lingadan supposedly looked after cattle owned by Cuchulainn’s mother, Dechtene and may have provided this pillar as a scratching post for the animals.  Others suggest that it marks the grave of Cuchulainn and Emer.  Dealg Finn, or ’Finn’s Brooch’, is a more recent name, the theory being that it was a brooch dropped by Finn McCumhaill’s mother. This may also explain the origin of the name Dun Dealgan.  The most likely explanation for its origin is that it was used as a route marker on an important ancient road called Sli Miodluachra that ran from Tara in Meath to Navan Fort in Armagh.  This forerunner of the M1 would have skirted the Dun and forded the Castletown river at Toberona.  Another similar stone on this route was removed when Castletown Cottages were being built a century ago.