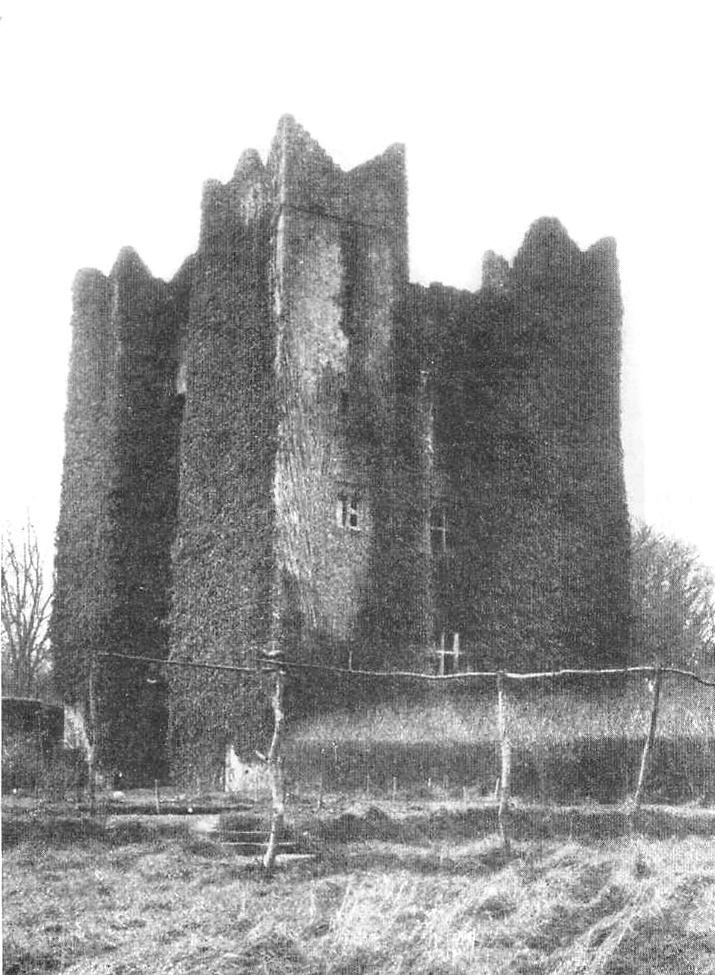 The Castle, commonly known as Castletown or Bellew’s Castle, is an integral part of our school.  It is a fine example of a Tower House of which there are 26 examples in Co. Louth.  Typically they were the residences of the gentry and were really fortified houses rather than ‘castles’.  Most tower houses were built in the late 15th century and tend to follow the same basic plan.  The government encouraged their erection to protect the Pale against the marauding Irish from Ulster by providing a grant of £10.

Richard Bellew, a prominent Anglo-Norman lord, built his castle in 1472 and the Bellews were to remain in residence for a further two centuries.

The rectangular structure stands 20.4 metres in height and is made mainly of rough limestone blocks. Four smaller towers project from each corner.  The original castle had four stories but an extra story was added when ‘renovation’ work took place in the early 1950’s.  One of the towers includes a spiral stairwell and another an interesting garderobe or medieval toilet facility.

Access at ground level was provided by a single and  rather small arched doorway   which  could be  protected from a platform above it. Projecting supports or machiolations and the outline of an entrance doorway  can still  be seen towards the top of the front wall.  Another ‘welcoming device’ was a ‘murder hole’ in the ceiling just inside the doorway.

The ground-floor rooms would have been used mainly as a kitchen and for storage.

The main room on the first floor has a distinctive rounded barrel-vaulted ceiling.

This was to support  the heavy stone floor of the room immediately above it.  The second floor would have been the principal room of the castle and was heated by two large fireplaces which are now blocked off.  There was access at this level from two of the turret rooms to the rooms immediately above by means of ‘secret’ stone stairways.  One of these rooms was probably a chapel and the room above it used as living quarters by a priest.

The original windows were stone mullioned and a lot smaller than their modern replacements. One of the towers has a small puzzling carved head projecting from a corner at second-floor level.  This can only be seen when the Virginia creeper, which now almost covers the castle, is not in leaf. Its purpose may have been to ward off evil medieval spirits!  A similar Sheelagh-na-Gig or Mouthpuller embedded in the wall in front of the castle probably came from the ruined chapel in the graveyard across the road.

By the 17th century the Bellew connection had ended and the castle was virtually a ruin and a more modern house, now the Convent, was built beside around 1740 by Edward Tipping.  Prior to  the school opening in 1950 only the ground floor was in use. Apples from the  extensive orchard in front were stored there.  The first St. Louis students then used it as a bicycle shed.  As the school expanded the decision was made to restore the castle as a school building.  These proposals met with considerable opposition from local historians but, as there were no such things as planning permission or preservation orders at that time, the work went ahead.

In recognition of its historical importance, in 1989 the Castle and grounds were selected by Dundalk Town Council as the venue for the main celebration of Dundalk’s Heritage Year. 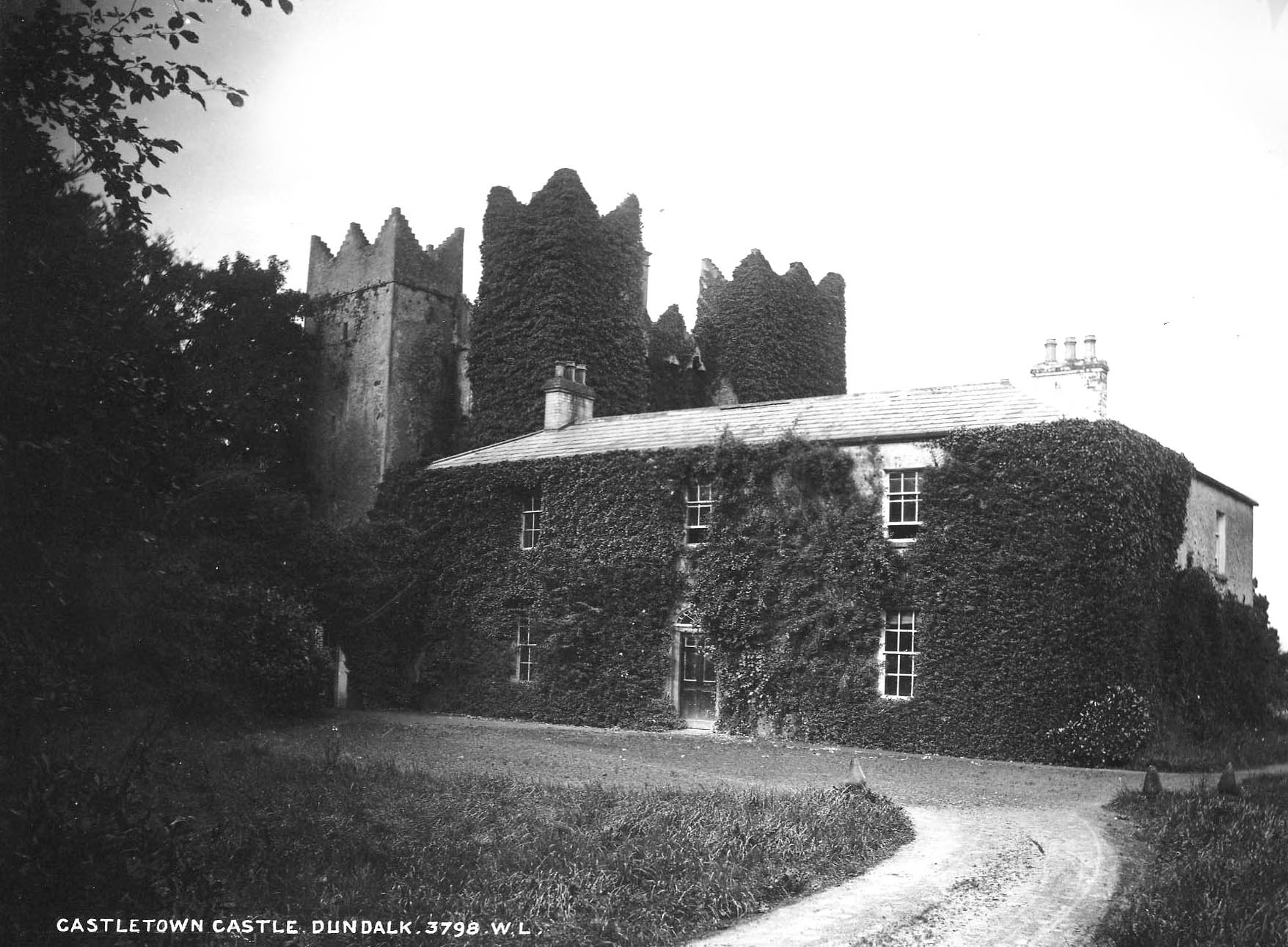 The house presently used as a convent by the Sisters of St. Louis was previously known as Castletown Castle House.  The Castle itself had been damaged in the campaign that led to the Battle of the Boyne in 1690 and in the 1730’s a new house was constructed beside it in the distinctive Georgian style.  In 1746, Thomas Wright, author of the archaeological survey ‘Louthiana’, stayed at Dundalk House to advise James Hamilton on the landscaping of his demesne. In ‘Louthiana’ he refers to the Castle and the new house at Castletown:

’This is a handsome old Castle belonging to Lord Bellew in tolerable good repair, having several rooms of it habitable, and at present tenanted by Edward Tipping, Esq., who lives in an adjacent modern house, making use of the Castle only as a kitchen and servant’s hall.’

The Tippings  were Cromwellians who came to Ireland in 1666 and settled originally in Westmeath.  In the 1720’s Thomas Tipping purchased nearly 900 acres in Bellurgan which was to become his principle estate.

During the Eastwood period of ownership the Castle was to remain in a state of relative neglect.  Much attention was given to the newer house and to the landscaping of the surrounding demesne. There are references to the good intentions of the occupier at the time to carry out restoration work on the Castle but they never really got round to it, probably due to the high cost involved.

In 1816 it is described by William Makepeace Thackery in his ‘Irish Sketch Book’:

’the property of Charles Eastwood Esq., the Castle is old but in high preservation and has several good apartments.  It is said to be the intention of the present owner to make such additions as will render it a suitable residence, and as they will of course correspond with the original building it will form an object of considerable beauty.’

Barrett’s Directory of 1886 mentions some improvements to the Castle and its idyllic location:

‘the roof and battlements have recently undergone thorough repairs, and from the summit of any one of the towers easily accessible by stone stairs , may be obtained charming views of the broad plain below, with its winding streams, fertile fields, ruins and Danish forts.’

Following the example of James Hamilton in Dundalk, the occupiers of Castletown Castle House did much to improve the appearance of the grounds and demesne. In the latter part of the 18th century many trees were planted, a formal garden laid out to the south of the house and a walled garden to the north.  Dr. D.A. Beaufort in is agricultural survey of 1803 noted the arch erected by the Rev. James Eastwood in 1790:

Dalton and O’Flanagan in their ‘History of Dundalk’ in 1864 were even more impressed:

‘Close beside the Castle is the mansion of J. Eastwood Esq., and the tastefully arranged grounds and well-kept lawn bespeak great love for the beauties of nature.’

By the turn of the 20th century a tennis court had been laid out and an orchard planted to the south of the house.  The orchard was so extensive that it was probably planned as a commercial enterprise.  Occupancy of the house had passed from the Eastwoods to the Biggers who originated in nearby Falmore Hall and were related through marriage.  In the 1940’s the house and grounds were purchased by the Taaffe family who had a shop on the Castletown Road.  Many of the trees were felled for timber during the war years and the Castle was used for storing apples from the orchard.  Sadly only a handful of the trees originally planted in the 18th century remain, one of them being the impressive specimen Cedar of Lebanon tree in the sunken tennis court area.

In 1948 the Castle and grounds were purchased by the Sisters of St. Louis who opened the house as a convent and secondary school in 1950.  Initially classes were held for the 16 students in the house and the Castle used as a bicycle shed!