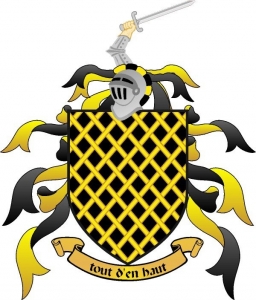 The Bellew family were closely associated with Castletown for a couple of centuries and have given us local names such as:  Bellew’s  Castle, Bellew’s Bridge, and Bellewsbridge Road.

They were a prominent Anglo Norman family and, while their chief residence was in Duleek, Co. Meath, they also owned Roche, Donaghmore and Kilkerley Castles.  Their influence in Castletown began in 1366 but it wasn’t until the 1470s that they gained full ownership and from that time the area appears to have enjoyed a revival of sorts.

Castletown Castle was one of two castles built by Richard Bellew in the 1470s, the other one being at the old medieval crossroads near the Mount.  He obtained grants of £10 from the Irish Parliament for the construction of  each of these castles as they were intended to provide protection for the Pale from the Ulster Irish like the O’Neills.  Strangely, Richard was outlawed for a period for associating with these same O’Neills!

Sir John Bellew (1520-1600) married three times, had 15 children, and was the sixth husband of his third wife!  In 1588, he erected  a tombstone for himself and his wife Ismay Nugent in St. Nicholas’ Churchyard in Dundalk but when they died they were buried in Duleek.

St. John’s Church in Castletown graveyard was also used by the Bellews. 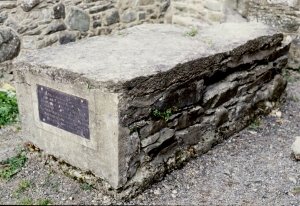 The largest tombstone in the church was  dedicated to Robert Bellew of Donaghmore who died in 1630. This stone was raised horizontally above ground level by the Archaeological Society in 1912 but the inscription is no longer legible.  A nearby altar-stone under the window  had, until recently, the following inscription: ‘Sir Walter Bellewe, Priest, erected this altar in honour of St. John Baptist the 1st of January 1631 A.D.’.

In 1654, as a result of the Cromwellian Settlement and the notorious ‘to Hell or to Connaught’ decree, over 700 acres of  the land of the Bellews in Castletown, as shown by the Down Survey, were confiscated from the then owner Sir Christopher Bellew and granted to Robert Reynolds, the Solicitor General to the Commonwealth. With the restoration of the monarchy the land was returned in 1660  to Sir John Bellew, Sir Christopher’s son, in a letter signed by King Charles II himself.

The same Sir John Bellew built Bellew’s Bridge in 1674. It is known locally as the ‘Coffin Bridge’ because of the unusually shaped capping on the parapet wall. Sir John owned extensive property in the area and also had the right to the chief fish or sturgeon at Dundalk and a third of the tolls and customs of the town.

By this time it seems that the Bellews were no longer living in the Castle because, according to the Hearth Money Rolls ( a type of census) in 1664, it was occupied by Wolstan Dixie.  A Walter Bellew, probably the priest, is also listed but he wasn’t residing in the Castle.

By the beginning of the 18th century it would seem that the Castletown Bellews were in financial difficulty.  In 1709, an Act was passed to enable Richard Bellew, Sir John’s son, to sell ‘part of the town and lands of Castletown occupied by Dudley Blyke and his tenants’ to pay off his debts. This seems to have ended the Bellew connection with Castletown.

Today, the imposing castle of Barmeath near Togher is the principal residence of the Bellews in Co. Louth. 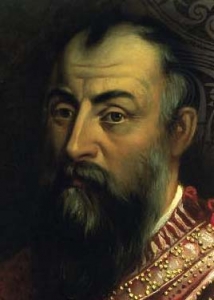 Because of its location at the northern end of the Pale, Castletown Castle was to play an important part in the Nine Years War at the end of the 16th century. The great Irish leader of this period was Hugh O’Neill, Earl of Tyrone, whose father was from Dundalk.

In his book ‘The Great O’Neill’s, Sean O’Faolain describes attempts at a truce that took place in Castletown in 1594. The Lord Deputy tried to arrange a meeting with O’Neill at Dundalk. At first O’Neill was reluctant but was eventually persuaded to meet the Lord Chancellor, Sir Robert Gardiner at Sir John Bellew’s house in Castletown.

O’Faolain describes how— ‘Gardiner took six others with him, and in the early morning stole secretly by back lanes out of the town. As he rode up to the gate of Castletown he saw no sign of the Earl, until lifting his eyes he saw, about a mile off, a large number of men standing on the hills, overlooking the house, and Tyrone with about twenty horsemen, and sixty others running by the stirrups, galloping down towards him — but not towards the house. Gardiner spurred on for a half a mile and then he halted on a hilltop in full view and sent a messenger forward that he was waiting for Tyrone. The Earl halted his company and galloped forward—’s After two hours of negotiations the highly suspicious O’Neill eventually agreed to proceed into Dundalk to meet with the Lord Deputy.

The exhausted Gardiner retired to the Castle for dinner with Sir John Bellew. The peace talks in Dundalk ended in failure, the Nine Years War continued and eventually concluded with the defeat of O’Neill in the crucial Battle of Kinsale.