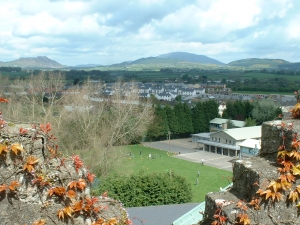 Dundalk was founded by Bertram de Verdon, a Norman who came to Ireland with Prince John in 1185.  He wasn’t an adventurer but a wealthy landowner and administrator and was  granted a huge area in North Louth. He selected Dun Dealga and Castletown as his headquarters and chief manor, building an impressive motte-and-bailey castle on the Dun and established a church dedicated to St. John the Baptist. De Verdon left Ireland in 1189 to join the Third Crusade to the Holy Land where he died in 1192.  A manorial or estate village grew up between the Dun and the church.  Its importance can be judged from the fact that it had a charter to collect tolls and hold a ‘hundred court’.  By 1332 there were 80 houses, a mill, a number of ‘highways’ and the surrounding area divided into fields for farming.  By that time, however, the fortunes of Castletown were on the decline.  Casteroche had become the main military stronghold and a new town had been established on the plain closer to the sea.  From the early 13th century documents were referring to Castletown as the ‘Old Town of the Castle’ and to the new settlement as ‘the New Town of Dundalk’.  While Castletown was an excellent defensive site it couldn’t compete with Dundalk’s advantages for trade and commerce.

By 1319  Thomas De Furnivall, another Norman who had married Joan de Verdon, had acquired a large part of the property of Castletown and Dundalk. The de Furnivalls were absentee landlords and this could also be a reason for the decline of Castletown.

The martlets on the Coat of Arms of Dundalk are derived from the de Furnivall shield. 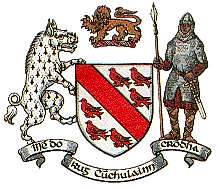 This coat of arms also acknowledges Castletown as the birthplace of  Cuchulainn and  the Norman origins of the town.  The boar is derived from the arms of the O’Hanlon family who were the main tenants of the de Verdons.Did You Know?

In the wall in front of the school there is a grotesque carving of a creature pulling its mouth into a wide grin.  This is one of the finest examples in Ireland of what is known as a ‘mouth-puller’. 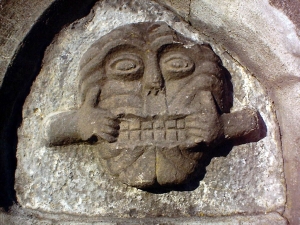 These carvings were placed at doorways and windows of medieval buildings to scare away intruders and evil spirits.

This example probably was originally located on the nearby castle or church. The bulging eyes, exposed teeth, exaggerated wrinkles and hands coming from behind the head were carved with great vigour and style.

Apparently ‘mouth-pulling’ was a very popular gesture in medieval times; hardly a friendly one! 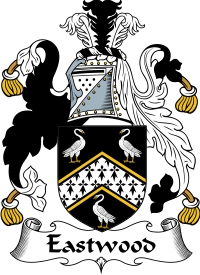 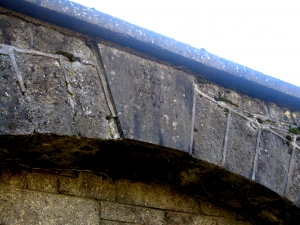 planters. This brought about the age of landlordism which was to dominate Irish rural life for the next two centuries. In the early 18th century Castletown was occupied by one of these Cromwellian families, the Tippings. By 1784 they had moved to Bellurgan and Castletown was purchased by John Eastwood from Creggan in South Armagh. The Eastwoods had originated in Nottinghamshire and came to Ireland in 1637. Rev. James John died in 1790 and bequeathed Castletown to his son James, a clergyman in the parish of Faughart and Ballymascanlan. James erected an archway at the gate to the walled garden on the N side of the demesne.

It included a plaque with his name and the date he inherited Castletown, i.e.1790. By this time the castle was no longer habitable so James, who was unmarried, would have lived in the adjoining house which had been built by Thomas Tipping. Even though he was a landlord he showed great sympathy to the United Irishmen and on one occasion played an active part in saving the lives of a group of local men. A meeting of local United Irishmen was taking place in Scotchgreen in 1798. An army patrol, sent from Dundalk to arrest the rebels, discussed their plans too loudly while drinking in Dransfield’s Hotel.

An elderly messenger was sent to warn of the impending danger. When he reached Castletown in an exhausted state James Eastwood sent his gardener named Haughey to Scotchgreen with a note for his neighbour John Byrne. He got there just five minutes before the arrival of the redcoats and the ten rebels managed to escape.

Also, in his book “The Sham Squire”, W.J. Fitzpatrick states that “the people of Castletown would have suffered severely, but for the bravery and intrepidity of the Rev. James Eastwood, to whom was deputed the power to pardon all who gave up their pikes to him..”And again, “ when a man called Daniel O’Hare was in gaol. Mr. Eastwood came into Dundalk and ordered the gaoler to turn him out, that he would answer for him.” When Michael Sherley of Castletown was given 300 lashes the Rev. Eastwood “courageously challenged the excesses of the yeomanry”. When the Rev. James died in 1808, his younger brother Charles inherited the estate. He too was to leave his mark in the form of the initials ‘CE’ carved in stone on the right side of the doorway to the Castle. He was High Sheriff for Co. Louth and died in 1828. James Charles was succeeded by his eldest son James. He is described as a ‘typical Victorian country gentleman and gave to many charitable works’. He was particularly interested in education and was involved with John Murphy and the local rector in the running of the infant school on the Mill Road. His income came mainly from his land and unlike many landlords of that period he was described as “not unpopular” among his tenants.

Clearly, however, he wished to maintain a distance from them as, rather than have them call to his house with the rent, he had a “hatch” installed for this purpose beside his gate at Castletown Cross. This, now blocked up, window can still be seen today. Immediately after the Famine there was great tension throughout Ireland between tenants and their landlords. Secret societies like the Ribbonmen mounted a campaign of violence against landlords and their agents. This was eventually to lead to the Land War. James Eastwood was the unfortunate victim in a notorious near death incident close to his home in Castletown.. In 1851 he was waylaid, badly beaten and thrown unconscious into a quarry behind what is now the Post Office where he was eventually discovered by some of his servants.

His gold watch and chain were missing and it was a month before he recovered consciousness. In July of 1852, three local Ribbonmen, James Kirk, Patrick McCooey and Thomas Belton were charged at the Assizes in Dundalk with attempted murder. The gold watch had been found sewed up in a stocking in the house of one of the accused. There was some intimidation of witnesses but eventually the evidence of Owen Hamill, who was working on the construction of the railway bridge across the Castletown Road, and Alice Campbell, who lived near the quarry, led to a successful conviction. Kirk and McCooey were sentenced to death and Belton to transportation. Eastwood made an emotional plea to have the death sentence commuted but on Sat 31st July 1852 Kirk and McCooey were hanged in front of the old gaol in Crowe St. Over 2,000 people, many of them “from the country” turned up to watch the execution. In his final speech from the gallows Patrick McCooey warned his “dearly beloved fellow Christians of Dundalk, in the name of Jesus Christ to have nothing to do with Ribbonism”. This was to be the last public hanging in Dundalk. James died childless in 1865 and was buried in the family vault at Creggan in South Armagh. His widow, Louisa, inherited much of his estate. At this time the majority of landlords were experiencing financial difficulty and the Eastwoods were no exception and much of the estate had to be sold off in 1868 to pay off creditors. James’ will gives us a good insight into his character. He left money for the establishment of an industrial school for girls with a plaque inscribed with Isaiah 41, 10 over the door. £75 was to be given to a missionary society to preach the gospel in Castletown and missionaries were to be given the use of Castletown Mount at the yearly rent of just one shilling. £10 per annum was to be made available “for a mistress of a good spiritual school in Castletown” and £5 was provided for books for a library at Castletown. The will also stipulated that no public house was to be allowed on his property!

What about Clint Eastwood?