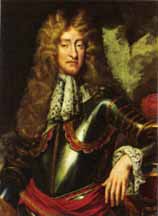 The Battle of the Boyne in 1690 was one of the most significant battles not only in Irish history but even on the European stage.  The  Castletown area was to feature in the events that led to this famous showdown between Kings William and James. In January of that year Major General Lanier led a force of 2,000 Williamites against Dundalk where they attacked Bellew’s Castle. Here is a contemporary account of the incident:

’….passed the river made out of the town near Bedloe’s (sic) Castle where, being a garrison of the enemy fired briskly and ours as briskly advanced upon the.  The enemy fled from the walls into the castle and, upon this, briskly fired from the battlements.  However, our men like lions eager for a prey, could not be daunted or restrained but run up to the gate which, being only barricaded within, was soon forced open and our men soon got into the lower part of the house and fell to firing up through the floor by which they wounded one man and, threatening to burn the house, the enemy from above hung down a white handkerchief and desired leave to march out with their arms but, being denied that, were forced to accept of quarter and surrender themselves as prisoners, of which there is in all about 20 of their army and 10 country fellows who are now on the road thither under a guard.’

They then proceeded to plunder the surrounding countryside of cattle and other livestock but didn’t attack Dundalk itself.

Later in June, both James and William were to pass through Castletown on their way to their contrasting fates at the Boyne. In June, James II advanced with 36,000 troops, made Bellew’s Castle his headquarters for 3 days and deployed his army along the south side of the river between Castletown and Dundalk.

There was a tradition in the area that his army camped under a tree in the Castle grounds.  This is obviously an exaggeration and may be a reference to just the king’s personal bodyguards.  Later in the same month, William of Orange crossed the Castletown River by the ford at Toberona and camped his army to the south of Dundalk.