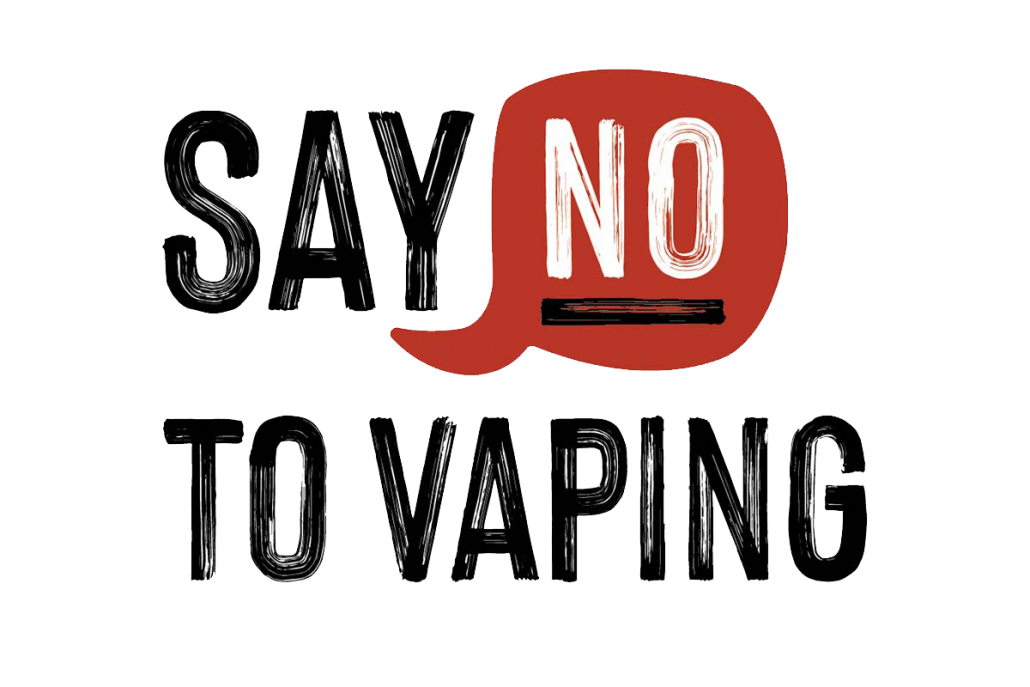 Information and Dangers of Vaping for adolescents

The term “vaping” comes from the act of inhaling and exhaling e-cigarette vapor (which is actually an aerosol). E-cigarettes heat up liquid from replaceable cartridges, producing the vapor. Just like a smoker does, an e-cigarette user inhales the vapor through the device, then exhales.

The most important thing to understand is that the liquid in e-cigarette cartridges is not regulated by the FDA. Because of this, we don’t know what’s being inhaled.

What we do know is that many cartridges contain nicotine, the dangerously addictive chemical found in normal cigarettes. Nicotine is derived from tobacco and produced synthetically.

Even if a cartridge doesn’t contain nicotine, other harmful chemicals may be present.

At least nine harmful chemicals have been found so far.

Flavouring can contain diacetyl, which has been linked to serious lung disease.

The heating process can release toxic heavy metals, including lead.

E-cigarettes can also be used to vape marijuana’s psychoactive ingredient, THC. Perhaps contrary to what many would expect, vaping marijuana may have as many negative health effects as nicotine-based vaping. This may have more to do with how vape liquids are processed than the THC itself.

While vaping does produce fewer chemicals than smoking, that doesn’t mean it’s safe.

Because vaping has only recently gained popularity, we don’t yet have the data to tell us all its health effects. This is especially true of long-term effects.

However, harmful short-term effects have already been observed. Vaping has already been associated with coughing, difficulty breathing, fever, nausea and vomiting. These symptoms may be an indication of vaping-related lung illness. Recently, as many as 1080 people have been identified as developing illnesses after vaping. According to the CDC, 18 of those people have died.

While it isn’t clear exactly how vaping is causing illness, it’s clear that people should avoid starting and quit immediately. People under 25 should especially reconsider vaping, as there may be more serious effects on their developing lungs.

The brain is also in development until a person’s mid-20s. During this time, the brain is constantly rewiring itself, which makes it far more vulnerable to nicotine addiction. This is part of why teens who vape are nearly three times more likely to begin smoking cigarettes.

Exposure to nicotine can also rewire a young brain to become more easily addicted to other substances, including cocaine and alcohol.

Outside of addiction, nicotine can also have other long-term and permanent effects on developing brains. These include mood disorders and reduced impulse control.

Teens are surrounded by reasons to try vaping. These can include:

The belief that e-cigarettes cause little or no harm.

The taste of vaping itself.

Packaging and advertising that appeals to youth, highlighting flavors and bright colors.

Marketing that includes sexual themes or plays on insecurities, similar to how the tobacco industry targeted youth.

A friend or family member who uses e-cigarettes or other tobacco products.

Over 50% of middle school and high school students reported seeing e-cigarette advertising. Only 28% of young people in the U.S. believe e-cigarettes have the potential to cause a lot of harm. Up to 40% of teens who vape are unaware their e-cigarette cartridges contain nicotine.

Nonjudgmental, non-confrontational discussion can help young people understand the risks associated with vaping. Let them know that their health is more important to you than anything else. Talk about the research showing a number of short-term and long-term risks to their lungs and brain.

Even if you’re a tobacco user, having an open, honest discussion with your teen can help. Tell them how tobacco has negatively affected your life. Talk about how hard it’s been to quit.

Teens today have access to more potentially misleading information than at any other time in history. They’re also bombarded by more sources of advertising than ever before. Helping a teen understand what sources to trust can give them a powerful tool to educate themselves.

…….For the study, Prof Münzel and colleagues investigated the effect of e-cigarette vapour on blood flow in the brachial artery in the upper arm in 20 healthy smokers before they vaped an e-cigarette and then 15 minutes afterwards. They also measured how stiff the artery became.

They found that just one vaping episode increased heart rates and caused the arteries to stiffen and the inner lining of the arteries, the endothelium, to stop working properly in the smokers. The endothelium is responsible for maintaining the correct dilation and constriction of blood vessels, protects tissues from toxic substances and regulates inflammation and blood clotting processes. Endothelial dysfunction is involved in the development of cardiovascular disease.

The researchers also found that an enzyme called NOX-2 was responsible for damage to blood vessels, including those in the lungs and the brain, as a result of e-cigarette vapour.

Prof Münzel said: “The results of the present studies identified several molecular mechanisms whereby e-cigarettes can cause damage to the blood vessels, lungs, heart and brain. This is a consequence of toxic chemicals that are produced by the vaping process and may also be present at lower concentrations in the liquid itself.”

Mr Mark Murphy, Advocacy Officer with the Irish Heart Foundation described the study as “hugely worrying” and he said it “added to our concern that electronic cigarettes can have detrimental health impacts and should not be merely regarded as a ‘healthy alternative’ to traditional cigarettes.”

“This research highlights the damage that e-cigarette use can have on heart, lung, brain and blood vessel health which only strengthens our concern around the increased use of these products by chronic smokers and in particular young people,” he added.

According to Mr Murphy, over the past decades, Ireland has worked tirelessly to reduce the level of youth smoking and the rise of electronic cigarette use among adolescents threatens to reverse this and produce an entire new generation addicted to nicotine.

3) Vaping legislation for U18;

Vaping companies came to Leinster House on Tuesday to defend e-cigarettes and vapes after research showed their use leads to increased tobacco smoking among children.

The session was part of the pre-legislative scrutiny that all Bills must go through in their journey through the Dáil and Seanad before they become law.

The debate is raging over whether the new technology is a safe substitution for cancer-causing cigarettes, or if they act as a gateway drug.

Research from the HRB (Health Research Board) shows that adolescents who had used an e-cigarette were between three and five times more likely to start smoking compared to those who never used e-cigarettes.

The vaping producers argue back that there are no dangerous carcinogenic toxins in vapes and that their products hep people give up the habit of smoking.

But the Government is taking no chances when it comes to children, with a Bill proposing a total ban on vapes for Under-18s making its way through the Oireachtas.

The proposed legislation will prohibit the sale of vapes and tobacco- and nicotine-inhaling products to persons under the age of 18.

“It will also make it illegal for under-18s to sell such products.

Oireachtas health committee chairman, Seán Crowe, said: “The Committee began pre-legislative scrutiny in November 2021 and we will hear from a number of stakeholders on the issue in the coming months.

“The Committee previously heard concerns from the Irish Heart Foundation that teen smoking rates are increasing for the first time in ten years due to an ‘explosion’ of vaping among this age cohort.

“Research from the Health Research Board has found that teenagers who vape are up to five times more likely to take up smoking citing the gateway effect.

“We welcome the opportunity to discuss these and other related matters with representatives.”

A spokesman for the Irish Vape Vendors Association, Declan Connolly, spoke at the committee hearing too.

He said: “smoking is the leading cause of preventable death in Ireland with almost 6,000 smokers dying each year from smoking related diseases.

“There is never a situation where it is better to smoke than it is to vape.

“Currently there are approximately 200,000 e-cigarette users in Ireland.

“The majority of these vapers have given up smoking completely.

“38% of those who made an attempt to quit smoking in Ireland in 2019 used e-cigarettes during this attempt.

4) Vaping survey carried out by HSE in Ireland

With the growth in popularity of e-cigarettes in recent years, there is concern in terms of their use by young people. In Ireland, there is no mandatory age restriction on the sale of e-cigarettes and their marketing may promote adolescent use. Nicotine exposure can harm adolescent brain development, and may act as a ‘gateway’ to smoking initiation among the youth. The study aimed to obtain an in-depth understanding of current knowledge, attitudes and behaviour of schoolchildren in terms of e-cigarette use.

Eight focus groups were undertaken in a convenience sample of three schools. This included an all-boy (Cavan), an all-girl (Sligo), and a mixed gender (Louth) school. Each focus group discussed vaping among schoolchildren in Ireland, attitudes to ecigarettes/vaping, the accessibility and availability of e-cigarette products, the health effects of vaping, and the combined use of vaping, smoking and alcohol. All focus groups were audio recorded and transcribed, from which a number of key themes were identified.

The following key findings emerged from the analysis of the focus groups:

The Irish Government should review e-cigarette advertising legislation. This review should consider;