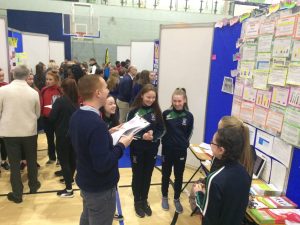 Five first Year students from St. Louis secondary school, Dundalk attended the PExpo at DCU last week. Sarah Lawrence, Erin Hogan Curtis, Ellie Sullivan, Clara Casey and Nicole Ellis presented their project to judges, teachers and students alike. The girls were highly commended by all who spoke with them and their work was greatly admired.

Their project, in the Wellbeing Category, gave detailed analysis of the work they have been part of since beginning First Year last September. Their project focused on addressing the following question; ‘Do we know how healthy and fit we are and what can we do to improve this?’

To answer this question, all students in first year answered an extensive survey and took part in fitness testing. Results indicated that while the majority of students thought they were fit and healthy, this actually was not the case. A large percentage of the year group took less than the government recommendation of 60 minutes daily physical activity and were of a ‘below average to poor’ level of fitness. Nutritional investigation found similar findings with the majority of first year consuming less than the recommended five-seven portions of fruit and vegetables a day, but conversely consuming too many high sugar foods, averaging three treats a day such as chocolate bars, crisps and fizzy drinks.

As a result of findings, all first year students undertook a six week programme where students learnt about eating healthily and the benefits of regular exercise. Work was issued for home and involved parents and siblings taking part in daily physical tasks and nutrition challenges. Each week of the six week programme, a different aspect became the focus. Examples included swapping unhealthy treats for healthier alternatives and performing exercises to adverts while watching TV.  The intervention raised awareness and helped with ideas to improve nutrition and encourage regular physical activity among families of first year students connected with the school. Students, parents, siblings and even grandparents were all found to have benefitted from the work with only positive feedback reported.

Other interventions as part of the project saw students counting their steps daily using pedometers and tracking their fitness through two further fitness tests. With greater understanding came greater knowledge and a greater level of awareness on how motivation can affect lifestyle choices. Students became so engaged with the project they participated in a further challenge at school to reduce the number of unhealthy treats they consumed in one week. First year students were encouraged to stop bringing unhealthy food into school and to reduce their consumption of unhealthy treats to a maximum of three in a seven day period. These treats, however, could not be fizzy drinks or chocolate. This challenge was so popular it was extended to the rest of the school and is running in school until the Easter holidays. 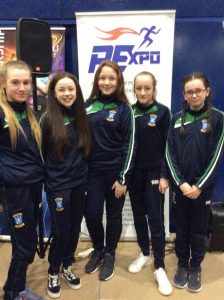 In order for the group of five students to establish if their efforts had been successful, all students in first year undertook further fitness testing and answered more questions from several surveys. Results were conclusive with five out of six (83%) first year students more active and consequently fitter. Approximately the same number were also eating healthier with parents noticing improved energy and concentration levels among their daughters.

One of the last interventions the girls introduced as part of the project was to design their own book of positivity. The girls collected words of wisdom and encouraging statements from all girls across first year, compiling them into a small and simple booklet. This booklet was distributed to all first years to keep in their pocket and for them to read when they were feeling sad of having a bad day.

‘Mental Wellbeing is an important issue. Falling out with friends or recovering from an argument can leave a person feeling upset for a while. This scenario is something all teenage girls can relate to and it is hoped by reading a quote from the ‘little book of positivity’, it will help girls in first year to get over their problems quicker and to turn their frown upside down.’ Explained PE Teacher Jenny Spain who oversaw the project from start to finish, she went on to say ‘These mini books of positivity were very popular at the PExpo, and many students and teachers from other schools asked if they could have one for themselves. The five girls created quite a buzz about the room with their ideas and energy and thoroughly deserved the high accolade of comments and positive affirmation received on the day.’

This was the first time St Louis have entered the competition and it was a new experience for everyone involved. The event itself was wonderful and it was inspiring to see the range of ideas and investigations from so many different schools and students. ‘PE has never really got the recognition it deserves as a subject, many parents who had bad experiences from their own lessons, harbour reservations and have passed on negative experiences to their children. Sedentary lifestyles, so many of the Irish population are now leading, thanks to the technological age, over-protection and a convenience led society, has brought about the huge rise in overweight or obese adults and children. Size is not the issue, but the huge medical implications that accompany obesity such as Type 2 Diabetes, high blood pressure, cardiovascular disease, high blood glucose, respiratory diseases and cancer cannot be ignored. Do we really want children in Ireland to pass through education, ready to start their life as an adult, only to spend the majority of their adult years relying on medicines and daily injections and suffering from life changing medical conditions? Evidence from the World Health Organisation estimates by 2025 Ireland will be the least healthy country in Europe and the most obese nation. Children, for the first time ever, are expected to die younger than the previous generation. Ireland has many things to be proud of, but can Ireland really be proud about this? 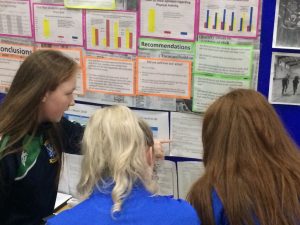 As the five students who presented this project show, it doesn’t have to be this way. This project is based on very simple, achievable concepts and evidence from first years and their families have shown through making small lifestyle changes improvements in fitness and health will follow. The concept of the PExpo, now in its fourth year, is fantastic and is helping to highlight so many important and interesting issues associated with Physical Education. The future is looking good for PE with the introduction of Leaving Certificate and Senior Cycle PE into the curriculum. St Louis was chosen as a pilot school and Kate O’Byrne, also a PE teacher at the school is ready to begin inspiring students with this option from September. ‘It’s a very exciting time and parents at the recent second year parent teacher meeting were already expressing an interest in the subject, two years in advance. We have always taken Sport and Health Education seriously as there are only benefits to gain and we were delighted St Louis was selected as one of the 80 schools from 369 who applied to pilot the leaving Certificate. Two years ago we were awarded the first Active Flag for any Secondary School in Louth and our ongoing commitment as a PE department but also the many teachers who give up their time voluntarily for sport teams on a weekly basis is testament to the importance we place on the health of our students.’