On Thursday January 9th St Louis was privileged to be one of 80 secondary schools across the country to be visited on the day by staff from the Department of Foreign Affairs and Trade as well as members of the Defence Forces UN peacekeepers. This is part of the ‘Global Ireland Schools’ programme which is linked to the Government’s strategy for doubling Ireland’s international impact by 2025 and is a partnership between the DES and the Department of Defence. The visits gave students across the country the chance to learn about Ireland’s role in a changing world from diplomats and peacekeepers who serve Ireland abroad and to talk about the work they do.
Brendan Rogers, a Dundalk native and Deputy Secretary General in the Department of Foreign Affairs and Trade spoke to Transition Years students and commented on their interest and attention as well as the searching questions offered by the group.  Also present was Eugene Farrell from the UN Peacekeeping Force as well as Patrick Rooney also from the Department of Foreign Affairs and Trade.
Each school was presented with a UN flag and a copy of the preamble of the UN Charter in recognition of Ireland’s contribution to addressing the biggest challenges facing our world today through peacekeeping, international development, human rights and disarmament.
Principal Michelle Dolan was grateful for the ‘great opportunity and experience for the students and the privilege for St Louis.’ 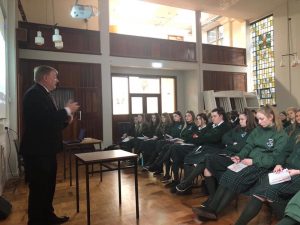 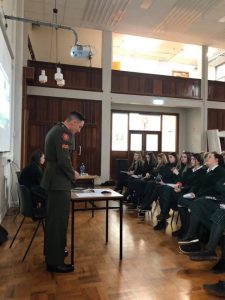 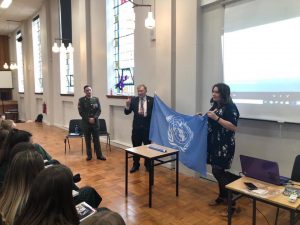