Awards Evening Goes Ahead Despite Events of Last Weekend
Thank you so much to our wonderful supporters for making our 8th annual Awards Night an extra special one this year.
Pelican Promotions provided us with 150 chairs to allow us to go ahead – and are also providing chairs again next Tuesday for the Leaving Cert Grad Mass. Thanks to Mandy and Shane for their generosity.
Paula Harrison, Mum to Orla and Rachel worked her magic to source 200 chairs from the Clans and Gary O Donoghue, Dad to the two football stars Hollie and Kellie both delivered and returned them in double quick time.
Yet another local club gave us the rest of the chairs we needed. Aidan Mc Ardle, Chairman of Roche Emmets offered us another 200, kindly delivered and collected by Martin Lavery, Dad to Una and Dearbhla, who helped with the loading and unloading!
Blooms donated the stunning floral displays which lifted the spirits of all who arrived that evening.
Des O Loughlin provided the audio visual equipment to bring Ms Mc Grath’s wonderful PowerPoint to life.
Dalton and Dash.ie generously sponsored a Chrome Book for our worthy Ethos winner Jolene.
Trend provided us with beautiful trophies and medals and our Sr Clare Memorial Award and jewellery for the Ethos nominees were Newbridge Silverware.
Ms Dolan thanked everyone for their support in a difficult week and reassured all that we will be back up and running in August in our own building again. She acknowledged the wonderful assistance given to us by DkIT and lots of other schools around town.
Interval acts for the evening were provided by Sixth Year Music students and Senior Council Members. Jolene Murtagh and Eimear Fealy performed a beautifully harmonised version of ‘For Good’ from the hit West End musical ‘Wicked’ Head girl Isobel O Reilly performed a poignantly appropriate song called ‘Rise Up’ which had the audience spellbound. Principal Michelle Dolan praised Isobel for her unceasing efforts all year for the students and the school.

Below are the results for the evening. 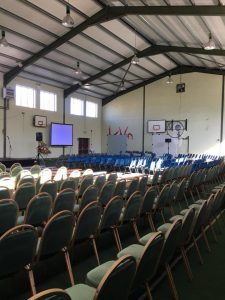